Garbage. Waste. Where does it go? Where in the world does it end up? How much of the stuff are we each generating anyway?

Yes, it fills up landfills. Yes, big trucks have to haul it there. Yes, it releases loads of methane, which is 22 times worse than carbon dioxide for climate change. Then there are the oceans – for cities and countries that still dump their garbage into the ocean, shame on you! There is a gyre of plastic the size of Texas in the middle of the Pacific Ocean. Some of the plastic has broken up so small, fish cannot help but digest it.

The other thing with garbage is the needless waste of energy and resources that were used to make it, just so it can be thrown out. Where did this garbage originally come from? Where on Earth was it derived? What is the embodied energy of it, what emissions were created to bring it into existence? It seems like such a waste of resources, just to throw it away.

Waste is so wasteful.

So let’s reduce it where we can. Time for the sliding scale of green for garbage! Even small changes can make a big difference. Where do you fit on the green sliding scale?

Here is our recycling for a 3 week period in 2010, before I started getting serious on cutting the packaging…

You avoid one use items such as paper coffee cups, paper napkins, paper towels and plastic forks. You avoid plastic bottles, especially ones with only a single serving, like water that comes out of the tap for free. You carry a travel mug for coffee, a water bottle for cold drinks. You use real dishes, and then wash them, and then use them again. I started doing this pretty hardcore with no excuses about a year and a half ago when I had my green epiphany. Here is my beloved green travel mug, which I use almost every day: 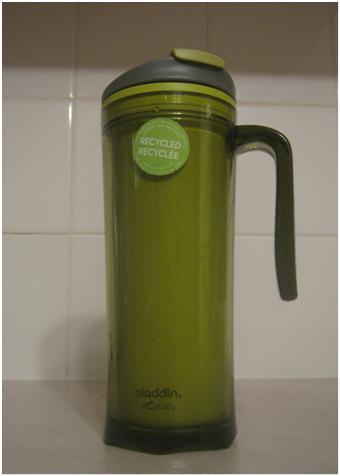 You bake. You make. You know how to cook. Homemade food always creates less garbage than pre-packaged and pre-processed, plus it is better for you and you know what is in it. Most garbage is created in the kitchen, and mostly from food packaging. Make it fresh and garbage free. I started making my bread about a year ago, and since then have tried all sorts of interesting things – tortillas, crackers, granola bars, buns, biscuits, muffins… I make a bunch, freeze it and then always have homemade snacks. Plus have you ever smelled fresh bread baking in your own house? They can’t bottle that smell, it is so good.

You compost your organic wastes. You have a small bin under the sink for those potato peels and banana peels, for old bread and eggshells, for kid’s leftovers and stuff that went bad in the fridge. Apple cores, carrot tops, onion skins, coffee grinds – they all go into the organics bin and then out to the backyard composter outside. If you live in an apartment you get some worms and have fun with worm composting (which makes an even richer organic matter). I toss my kitchen scraps into my composter outside all winter long. It freezes solid. I just layer some brown leaves over each donation, and then it is ready for more. In the spring the whole thing thaws and heats up and gets going again. A year full of organic wastes from the kitchen and yard get transformed into rich organic compost, the very best kind of dirt you can get. What kind of miracle of nature is that? Garbage to growing material, renewed again. None of it goes to the landfill – a closed loop system.

You don’t buy food with packaging. Full stop. Nothing in a box, nothing in a metal can, nothing in a plastic container, nothing in glass… You bring your own produce bags to the grocery store, you avoid processed foods, and you make your own soup. You also preserve your own food, allowing you to reuse glass canning jars for tomato sauce, salsa, jams, pickles and peaches. You bake your own bread, muffins, granola bars and snacks. You have barely any garbage or recycling, maybe a small bin every two weeks. The garbage man often skips your house. You start to wish that you paid for garbage collection on a per bag basis, because then it would be practically free…

Do you get any bonus points?

So where do you fall on the green sliding scale? We can reduce our garbage a lot just by thinking about it. Most of the garbage decisions are made at the grocery store, in the food packaging we haul home. If you don’t buy it, it will not end up in the bin!

Want some inspiration? Here are some great low garbage superstars of the blogging world: