My muscles ache. I feel a heavy tiredness within my body, and an excitement of what lies ahead.

That’s right. I am setting up my garden.

Over the last few weekends, I have built my garden beds. Two weekends ago, I built my wooden raised beds. I went to the hardware store (kids in tow), purchased lumber, and the nice guy at the store cut it for me on the spot. Then we had a flash snow storm. Undaunted, I built two wood frames in my sunroom, and as the snow fell all around me, I switched back and forth from feeling crazy for building a garden when there is a foot of snow outside, and excited that I was pushing through with this project, despite the weather. My son helped – he handed me the screws as I needed them. 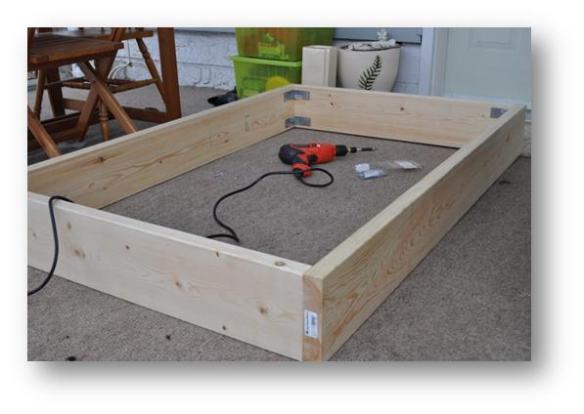 When they were done I felt pretty proud of myself. I had dreamed up this idea back in December, and here I was, making it happen. I did it all by self. I drilled, I fastened, I built.

Here they are, propped up waiting for the snow to melt. 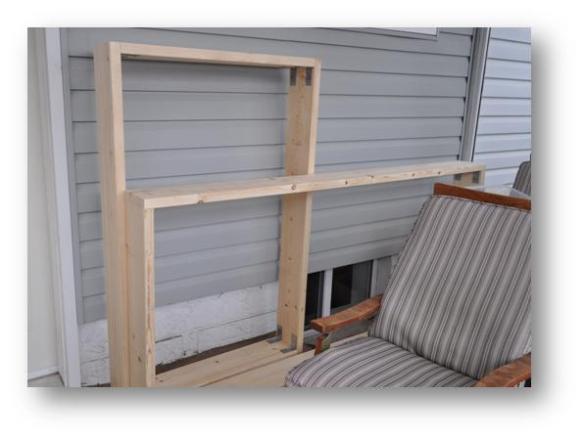 The weekend before that, I got busy making 6 large container beds that can sit on my patio. My patio receives the best sun, so containers I must have. These are self-watering, a premise I had not heard of until I found the Urban Organic Gardener – he grows food on his balcony in home-made containers. Intrigued, I read The Vegetable Gardener’s Container Bible and Fresh Food From Small Spaces and they both explained how to build containers yourself and both told tales of all the great food you can grow. In some ways they preferred a container garden to an earth garden, as the soil warms up earlier in the spring, the water is easier to control, and the plants are easier to reach. You can make them yourself or buy them. There are commercial self-watering containers available, such as the Earth Box, which some farmers even use. There are also basic pots available at garden centres that have the self-watering feature. It is the new thing!

To make my containers, I got the largest bin I could find, cut down edges of the lid so that it would fit inside the bin to create a false bottom, cut two large holes in the lid, and then inserted a small colander under each hole. I also placed 3″ pots upside down in each corner, to help hold up the false bottom. The idea is that the reservoir below is filled with water, and the water seeps into the colanders that are filled with soil, and then wicks up through the soil in the colander and then into the container. So how do you get water into the false bottom? Well you can either make a hole in the bin near the bottom, or you can insert a pipe that is watered from above. I decided on the pipe, as it would be easier to water and would not interfere with the reservoir size. 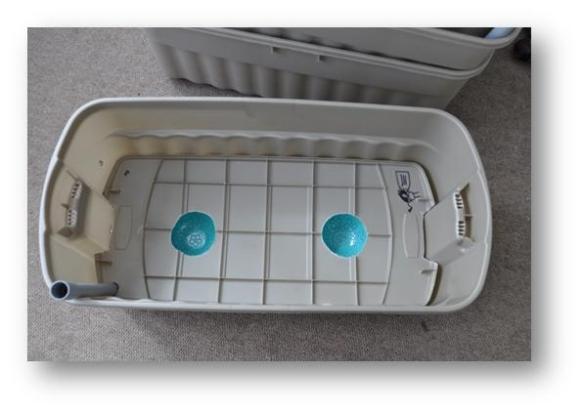 Sounds great right? Well it turns out that cutting the plastic lid is pretty hard. I used industrial cutting snips with no avail. Total bust. So I decided to try sawing it, and that worked better, although it was slow going. In the end, I sawed 5 of them, and my husband (through some Tom Sawyer trickery) sawed one. I went through two blades on a hack saw.

My son also “helped” with these. I would not let him operate the saw, but I let him help me cut the pipe, tandem style, back and forth. He liked that. Then at one point he took my marker and drew a picture of me cutting all my boxes: 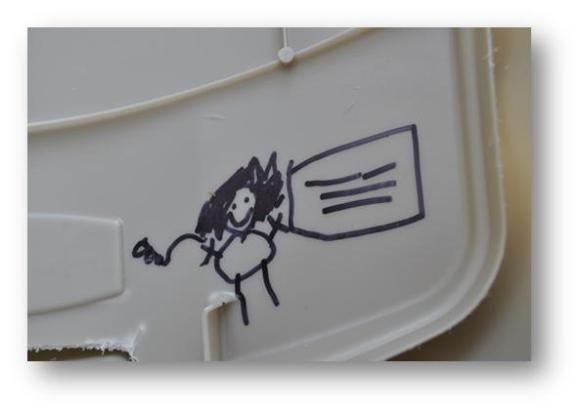 Yes, I am a builder mama. The garden beds are built.