I first started thinking about this topic when I heard that they were considering closing our neighbourhood elementary school. We live in an older area (my house is circa 1956) and there are demographically less kids (but more seniors!) here than in other areas. Nobody wanted to see our school closed, it was a vibrant force in the community with over 220 children. It was next door to one of the best daycares in the city. It shared the same field as an indoor ice rink, an outdoor rink, a baseball diamond and a spray park. It had been operating for 46 years. Most importantly for me, it was just down the street.

In the end, our school closed anyway, along with 4 other schools nearby. There are many reasons why it closed, but many residents blamed the short-sighted views of some of the public school trustees in not considering how community adds value to the quality of a school. The school provides the community with an anchor, a gathering place. A sense of community – the feeling that you belong and are part of something – I think it really does enhance quality of life, happiness even. You watch out for each other, help each other. Crime goes down.

The main reason our school closed, though, was urban sprawl. That really is the root of it all.

So why do we live so spread out? I suppose many young families prefer to live out on the edges of the city, where they can get a bigger, nicer house for less money. But what about the new infrastructure that is required – roads, power cables, phone lines, natural gas conduits, water mains? Obviously, a city with a large geographical footprint per capita takes a lot more tax dollars to run. Usually also, transit is bad. Basically, sprawling cities are inefficient.

The most efficient cities are ones like New York, where people can walk to any service they want and most don’t even have to own a car. Higher density living lessens the strain on the infrastructure, the tax base and most importantly, the environment. In sprawled out cities, people have to get in their cars and drive for a long time multiple times a day. Farmland and natural areas are lost.

Now don’t get me wrong, we did not purchase our house 8 years ago with the environment in mind. Back in 2002, I recycled but that was about it. The location was determined by triangulating ourselves between work, my parents and his parents. We did not want to drive more than we had to. But now that we are here, what we really enjoy are the huge mature trees (see our big tree)… 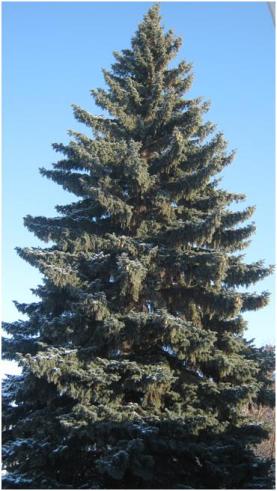 …not to mention the local schools (despite the closure), and many services like the library, grocery store and restaurants within a 10 minute walking distance. Plus it only takes 12 minutes to drive to work, and better yet, the bus is super easy to take from here. Add to that, our heating and electrical bills are lower than that of a big house, and I don’t buy as much stuff we don’t need, since we really have no place to put it.

In short, living in a smaller house that is closer to the places we need to go, gives us a lower carbon footprint. This makes me feel good, and mostly offsets the annoyance relating to small closets and not enough cupboards.

There is another serious issue though – urban sprawl can have devastating effects on a city if left unchecked. The core starts to rot. More schools close. Families move out, crime moves in, and it is a hard cycle to reverse.

Today’s resolution is to continue to advocate for limiting urban sprawl in my city. I will do this by talking about it, voting for city councillors that advocate higher density communities, and learning more about the topic as it relates to my city.

I can feel that little inner active citizen acting up again…

Here is a great song by Arcade Fire. The video montage of 50s suburbia makes me realize that my house would have been located in the suburbs during this time!